prof.Riccardo Manzini organized the visits of two important companies on April and May 2016 with a selection of students from Mechanical Engineering and Management Engineering of the School of Engineering and Architecture of Bologna University

The company was founded in 1877 as a bakery shop in Parma, Italy by Pietro Barilla. The company is privately held, and remains in the fourth generation of Barilla family ownership and control through three brothers, Chairman Guido Barilla, and Vice Chairmen Luca Barilla and Paolo Barilla.

We visited both the processing/manufacturing system and the warehousing system equipped with more than 50 Laser Guided Vehicles for material handling. 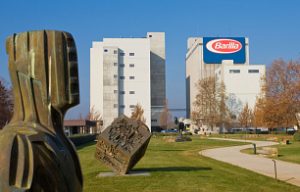 st way of attacking the market. Today Corghi is the leader in the Italian market and a world leader in the vehicle assistance equipment sector for automotive industry.